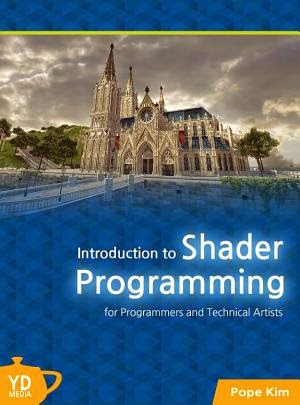 New HLSL in this chapter

What did you think about what we covered in the last chapter? Too easy? It didn't seem that useful for the game you are trying to make? Yeah, you are right. The main goal of the last chapter was learning the basic syntax of HLSL through a simple practice. Just consider it as a hello-world program in other programming languages. Now, you are going to learn something more useful in this chapter. What about wrapping the red sphere with an image? You know this is called Texture Mapping, right?

As mentioned earlier in this book, the building blocks of a 3D object are triangles. Then, what's involved to put an image, or a texture, on a triangle? We should order the GPU like this: "Show the pixel at the right-bottom corner of that image on the left vertex of this triangle"[1] We all know that a triangle is made of three vertices, so all we need to do is mapping each of three vertices to a pixel in a texture. Then how do we specify one pixel on a texture? A texture is an image file after all, so can we just say something like "the pixel at x = 30, y = 101"? But, what happens if we doubles the width and height of the image? We will have to change it to "x = 60, y = 202". This is not good, at all!

Let's take a moment and think about a common sense that we learned in the last chapter. We did something very similar with the color representation. To represent a color in a uniform way regardless the number of bits per channel, we used the percentage notation [0~1]. So why don't we just use the same method? Let's say x = 0 points to the very left column of a texture, and x = 1 points to the very right column. Similarly, y = 0 is the top row and y = 1 is the bottom row. By the way, the UV notation is normally used instead of XY for texture mapping; there is no special reason, it's just to avoid any confusion since XY is normally associated with positions. Figure 3.1 shows what we just discussed here: 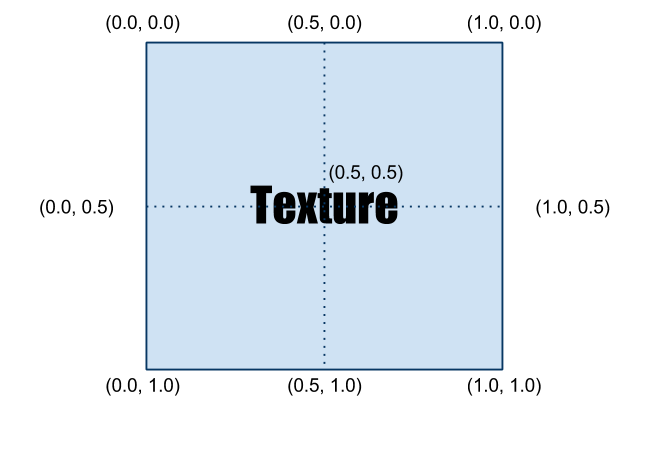 Figure 3.1 UV layout on a texture

Additionally, you can flip the texture horizontally if the range of UV coordinates is set to [1, 0] ~ [0, 1]. I believe it's enough for you to understand how UV coordinates work. Then, it is about time to write Texture Mapping shader, finally!

Once you finish these steps, the Workspace panel should look like Figure 3.3. 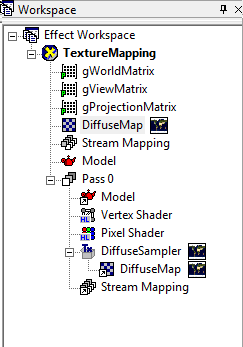 The full source code is listed below, followed by line-by-line explanation.

Before walking through the vertex shader code, let's take a moment and think about what kind of new data is needed to perform texture mapping. Obviously, we need an image, which is going to be used as the texture. Then where should we perform the actual texture mapping between the vertex and pixel shaders? If you think about where vertex and pixel shaders are executed, you can find the answer easily. A vertex shader is executed for each vertices, but where the texture will be shown? Is it on vertices? No, it's not. We want to see the texture on all the pixels inside of a triangle, so texture mapping got to be performed inside the pixel shader, which is executed for each pixels. Then, now we know that it's unnecessary to declare a texture variable inside of vertex shaders.

We start from the input data structure used in Chapter 2.

The reason why the number 0 follows TEXCOORD is because multiple TEXCOORDs are supported by HLSL. There are cases where multiple textures are used in a shader. In those cases, you would use different semantics, such as TEXCOORD0, TEXCOORD1 and so on.

Again, we start from the output structure used in Chapter 2.

Pixel shaders cannot directly access the vertex buffer data. Therefore, any data that needs to be accessed by pixel shaders (e.g., UV coordinates) must be passed through vertex shaders. Does it feel like an unnecessary restriction? Once you look at Figure 3.4, you will understand why this restriction exists. 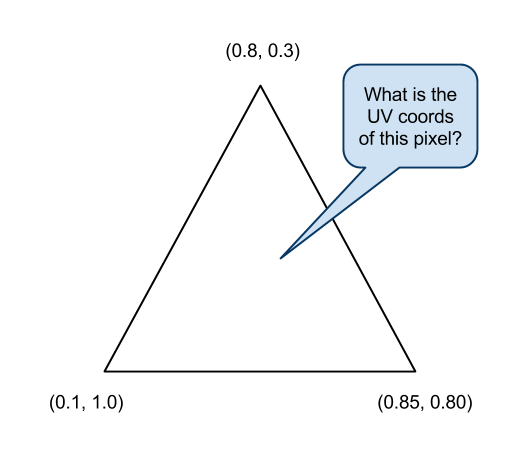 Figure 3.4 What would be the UV coordinates of this pixel? 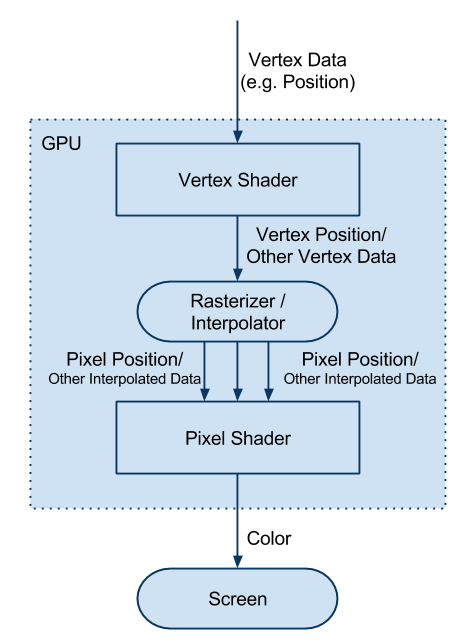 By the way, this device doesn't stop at interpolating[6] the UV coordinates. It interpolates any data that is returned from vertex shaders and pass the result to pixel shaders.

By now, you should know that the UV coordinates need to be returned from this vertex shader. Let's add the data field.

We don't need any extra global variables other than what we already used in Chapter 2. So, I'll just show the code again and skip the explanation.

You heard it enough. The most important responsibility of a vertex shader is transforming vertex positions into the projection space. The below code is identical to the one used in Chapter 2.

I cannot think of any other data that needs to be handled here, so I'll finish this function by returning Output.

As done in Vertex Shader section, the full source code is listed first below:

It is time to look at the pixel shader. What we need to do here is retrieving a texel [7] from a texture image and output its color on the screen. Then, we need a texture and current pixels' UV coordinates, right? A texture image is uniform for all the pixels, so it would be a global variable. Unlikely, the UV coordinates are part of the input data sent from the vertex shader and passed through the interpolator. First, let's declare the input structure of the pixel shader.

sampler2D is another data type that is supported in HLSL, and is used to sample a texel from a 2D texture. There are also other samplers, such as sampler1D, sampler3D and samplerCUBE.

Now, we are ready to write the pixel shader function.

Let's take a look at the function header first

The above code reads a texel which is located at the coordinates which Input.mTexCoord specifies from DiffuseSampler. And the value will be stored in a variable named albedo. Now what do we do with this value? Well, we wanted to show the texture as is, so let's just return it.

If we press F5 to compile the vertex and pixel shaders and see the preview window…… uh… it's messed up! 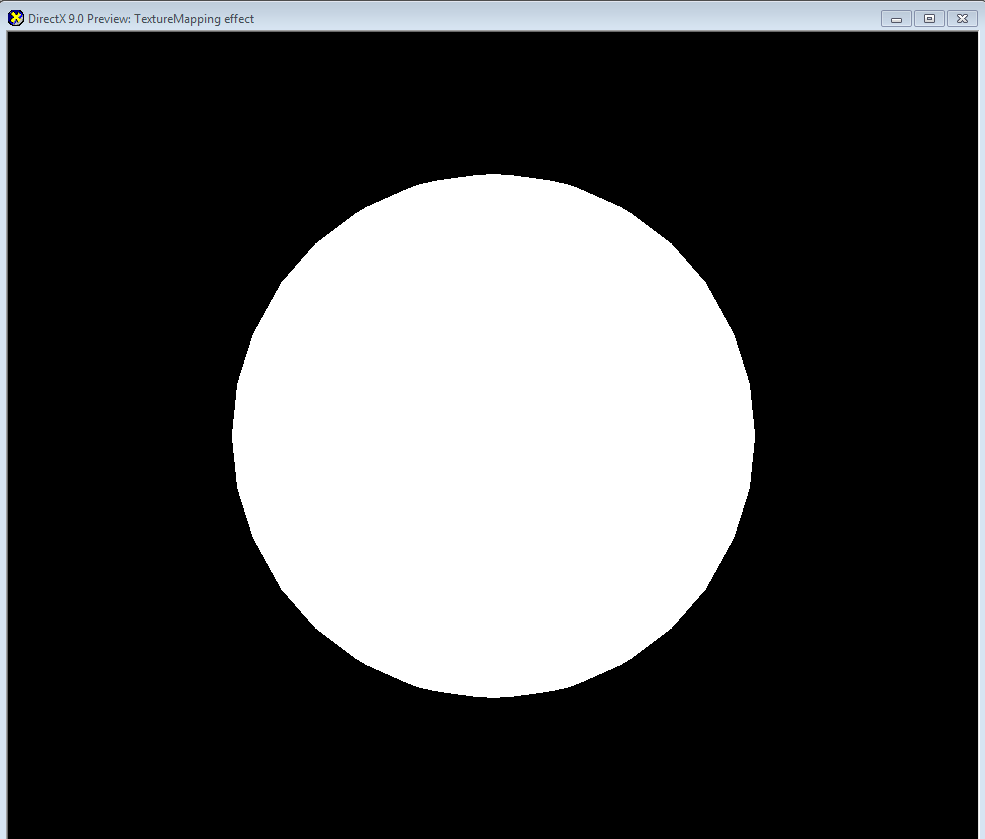 Figure 3.6 Something is messed up here!

Why? It is because that we forgot to map the UV coordinates element in the vertex buffer to the TEXCOORD semantic. To map it properly, go to Workspace panel and left-click on Stream Mapping. There is currently only one entry: POSITION. Now click on Add button to add a new entry, and then change Usage to TEXCOORD. Make sure Index is 0 and Data Type is FLOAT2. You do not need to change Attribute Name. Once you click on OK button, you will see a proper globe as shown in Figure 3.7. 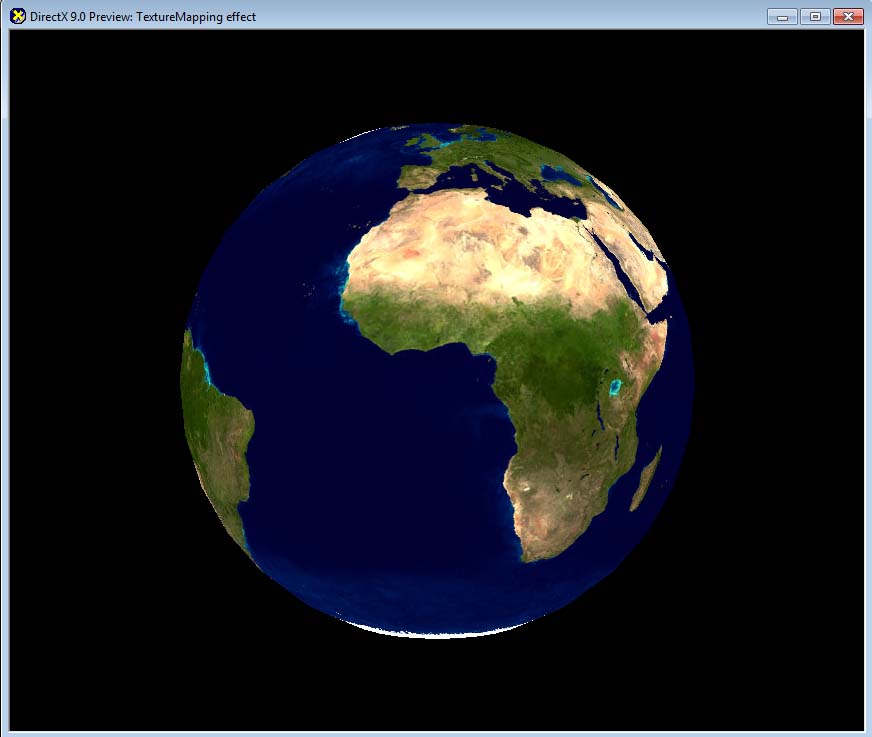 By the way, did you notice that I used return albedo.rgba; instead of return albedo; while returning the final color? Although it is completely valid to use return albedo;, I intentionally did so to show you something new.

In HLSL, you can attach a postfix, such as .xyzw or .rgba to a vector variable to access the vector's components with ease. For example, if we are dealing with a float4 variable, which has a four components, you can think it as an array of four floats. So if you add .x (or .r), it accesses the first component. Likewise, .y (or .g), .z (or .b) and .w (or .a) point to the second, third and fourth components, respectively. So, if you want to get only the rgb value from albedo, you would do something like this:

Neat, right? But it does not stop here. You can even change the order of the postfix to access vector components in an arbitrary order. Below example shows how to create a new vector with the same components, but in reverse order.

Or you can even repeat only one channel three times like this:

Pretty rad. We refer this technique, which allows us to access vectors' components in any arbitrary order, swizzling.

Maybe you can do some practice here. How about switching the red and blue channels of the globe? Go ahead and try it. It should be a piece of cake for you. :-)

This is an optional section for readers who want to use shaders in a C++ DirectX framework.

First, make a copy of the framework that we used in Chapter 2 into a new directory. Then, save the shader and 3D model into TextureMapping.fx and Sphere.x respectively so that they can be used in the DirectX framework. Also make a copy of earth.jpg texture file that we used in RenderMonkey. You can find this file in \Examples\Media\Textures folder from RenderMonkey installation folder.

First, let's look at the global variables. In Chapter 2, we used gpColorShader variable for the shader. Change the name to gpTextureMappingShader:

Also, we need to declare a texture pointer, which will be used to store the globe texture.

Don't forget to release D3D resources that we just declared. Go to CleanUp() function to do so. Doing so makes you a good programmer. You know that, right? ;) Also don't forget to change the name of gpColourShader.

Now we will load the texture and shader. Of course, we do this in LoadAssets() function.

First, change the name of shader variable and file to gpTextureMappingShader and TextureMapping.fx, respectively.

Then, load earth.jpg file by using LoadTexture() function that we implemented earlier in this book.

Now go to RenderScene() function which takes care of all the drawings. There are multiple places where gpColorShader variable is used. Find and replace them all to gpTextureMappingShader.

Well, complaining does not solve anything. So we will just use this variable name. In order to pass a texture to a shader, we use SetTexture() function. Like SetMatrix() function, it takes the variable name in the shader as the first parameter.

Now, compile and run the program. You should be able to see the same visual as RenderMonkey showed us. Hey! I have an idea. Why don't we do something cooler? Let's make it rotate! After all, it is the earth!

First, add a global variable which will remember the current rotation angle.

The rotation and position of a 3D object are part of the world matrix. So, let's go back to RenderScene() function and change the world matrix construction code like this:

The above code keeps adding 0.4 degree to the rotation each frame. Depending on the computer you are using, this might make the globe to rotate too fast or slow. Change the value appropriately. [8]

Run the code again. You can see the rotating earth, right?

A quick summary of what we learned in this chapter:

I cannot think of an advanced shading technique which doesn't rely on texture mapping. So, texture mapping is very crucial in shader programming. Fortunately, performing a texture lookup is very easy with HLSL, so please practice it enough so that you can use it anytime!

Congratulations! You just finished texture mapping. Now take some break, and see you in Chapter 4. :D